The Town of Oak Bluffs is a residential, resort community located on the northeast shore of the island of Martha's Vineyard. Originally incorporated in 1880 as Cottage City, in 1907 the town's name was changed because of the growth in the year round population and the changing face of the resort required an acknowledgment the Town was not just "Cottage City" any more.

Martha's Vineyard is a 100 square mile island located three miles off the coast of Cape Cod. Formed by the southern most advance, or terminal moraine, of the North American ice sheet during the last ice age over 10,000 years ago. Today, year-round residents, seasonal residents and hundreds of thousands of short-term visitors live on or come to the island, attracted by the unique natural, ecological, historical, cultural and scientific values that define the beauty and character of Martha's Vineyard.

Approximately three quarters of the island's population is concentrated in the three "Down-Island" towns of Tisbury, Oak Bluff's and Edgartown, each with their own unique commercial town centers. Vineyard Haven in Tisbury serves as the islands main port and is supplemented by a port in Oak Bluffs in the summer time. The three "Up-Island" towns of West Tisbury, Chilmark, and Aquinnah are more rural in character. 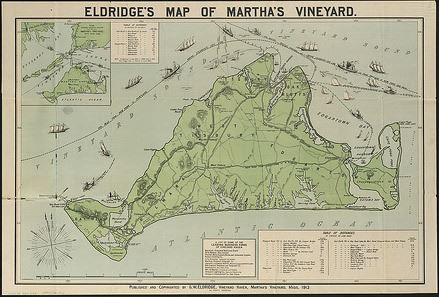 Covering approximately 7.37 square miles, Oak Bluffs is located in the County of Dukes County. The Town is bordered by the Town of Edgartown on the south, the Town of Tisbury on the west and Nantucket Sound on the north and east. Today, Oak Bluffs is home to the largest marina on Martha's Vineyard, a bustling seasonal waterfront and downtown, and the historic gingerbread campgrounds. Oak Bluff's hosts several beautiful beaches and public parks; a teeming shore of wildlife, fish and shellfish; a golf course and a number of civic amenities that make the community a great place to live, work and play.

Oak Bluffs is governed by an Open Town Meeting form of government, which makes all local legislative decisions. Town Meeting consists of all registered voters of the Town. During the Annual Town Meeting, all registered voters may vote for or against articles presented on the Town warrant. The affairs of the Town are generally administered by a board of five selectmen, elected for staggered three-year terms on an at-large basis who appoint and are assisted by a Town Administrator. The voters of the Town elect, and the Board of Selectmen appoint, citizens to fill positions on various committees, or to represent the Town on other entities, that are vital to the operation of the town.

Responsibility for the educational needs of the children of Oak Bluffs rests with the elected School Committee. Day-to-day operational responsibilities are delegated to the Superintendent of Schools.

Oak Bluffs provides general governmental services, which include police and fire protection, public education in grades pre-kindergarten through eight, curbside residential refuse and recycling services, streets, parks and recreation, and cemetery maintenance and operation. Waste water facilities and sewerage is provided by the Town through a wastewater Enterprise Fund.

The Town participates with several regional governments or special districts to deliver services. The Oak Bluffs Water District, a separate municipal entity, provides water infrastructure and services. The Martha's Vineyard Regional Transit Authority provides year-round transportation services. The Woods Hole, Martha's Vineyard and Nantucket Steamship Authority provides passenger, commercial and freight ferry service between the island and Woods Hole and Hyannis. The Martha's Vineyard Regional High School provides public education for grades nine through twelve. The Martha's Vineyard Commission is the regional planning agency for the Island. The County of Dukes County provides for space for courts, a jail and house of correction, the registry of deeds, the operation of an airport, as well as several regional service programs. Information, including budgetary information on each of these entities is publicly available via the internet, or by contacting each directly.

The value of all property (Real and Personal) of the Town, resulting property tax rates and impacts on the average Single Family Home (SFH) in Oak Bluffs, are below. The rank listed is where Oak Bluffs average SFH tax bill falls compared to the other 351 communities in the Commonwealth of Massachusetts.

Population, employment and income data is presented to indicate the demographics served, and to provide a measure of our citizen's ability to pay for the taxes and fees indicated in our budget. To some extent, this data also provides indicators on factors that have may have a significant impact on Town budgets, i.e. school enrollment and collective bargaining obligations.

In addition to the Town of Oak Bluffs, the Town's largest employers include Martha's Vineyard Regional Hospital and YMCA Community Service employing approximately 200 and 110 employees, respectively. These employers are supplemented by approximately 249 establishments representing construction, professional, service, leisure, retail and other businesses. The average annual wage per the Massachusetts Executive Office of Labor & Workforce Development was $88,051. Per U.S. Department of Commerce, median income was $96,714 and per capita income was $36,789. All data using 2016-5 year estimates.

The Town has approximately 210 full-time, part-time, and seasonal employees, of which approximately 54% belong to collective bargaining groups, as follows: